Ground-penetrating radar (GPR) is a geophysical method for surveying an underground environment, based on the emission of pulses of electromagnetic waves and registration of signals reflected from various objects of the probed environment. The signal is emitted by the transmitting GPR antenna, the response is received by the receiving GPR antenna 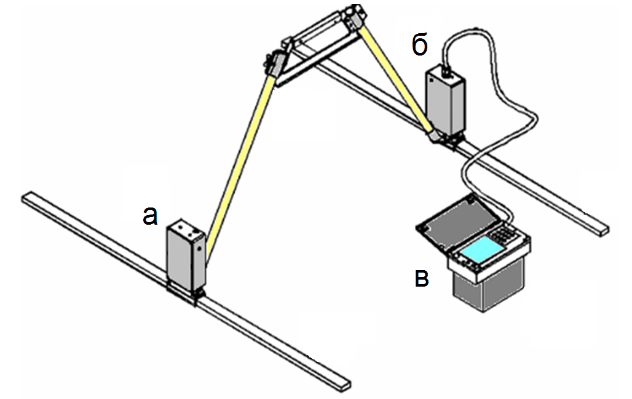 General view of the LOZA series GPR: a - transmitter; b - receiver; c - control and display unit

GPR survey can be carried out in two modifications: GPR profiling on a permanent base and GPR sounding on a variable base

GPR profiling on a permanent basis

Common offset profiling is a standard GPR survey method. A profile is outlined, which is then followed by an operator with a GPR, whose antennas of the receiver and transmitter are at a constant distance from each other 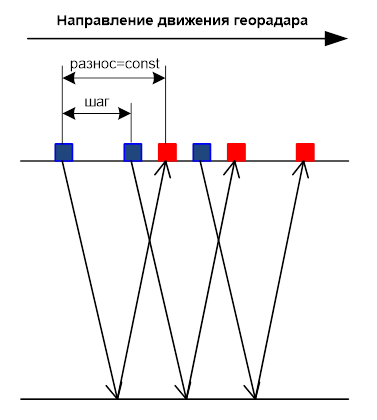 At a given point, the transmitting GPR antenna emits an electromagnetic signal into the medium. This signal propagates in soil and air, where it experiences various wave processes. The signal that reached the ground surface back to the receiving antenna is received and stored in the GPR memory. This path is a function of the amplitude of the incoming signal from the time of its arrival at the receiving antenna

An example of a real track

With a predetermined step (usually from 0.1 to 2 m), the GPR moves along the profile. The track is recorded at each parking lot. The resulting set of traces is called a radarogram. For convenience, the radarogram is presented in the form of an image, the horizontal axis of which corresponds to the distance from the beginning of the profile, the vertical axis is the time of signal arrival, and the color is the signal amplitude.
Each vertical section of the radarogram corresponds to a trace - the dependence of the signal amplitude on time 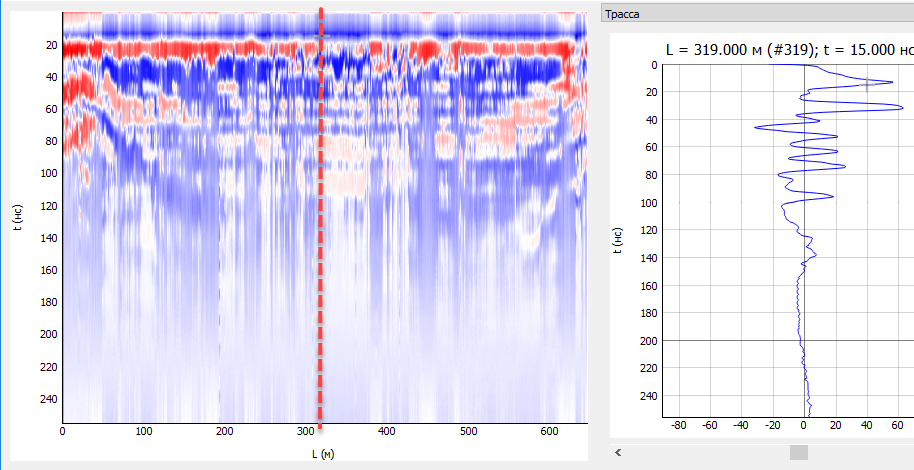 An example of a radarogram. The vertical line corresponds to the track (on the right)

In the case when there is a small local object (pipe, cable) in the probed medium, the phenomenon of diffraction occurs. This means that if there are local objects in the profile area, then on the resulting radarogram, each such object will correspond to a hyperbolic contour

Scheme of the occurrence of the phenomenon of diffraction: a - the process of GPR profiling over a local object; b - diagram of the resulting radarogram; c - an example of a real radarogram with a diffraction hyperbola

The highlighted hyperbola can be used to determine the location of the local object (horizontal distance and depth), as well as the average speed of propagation of radio waves above the object

Converting a temporary GPR section into a depth section
The initial radarogram is a time section (the vertical axis is the time axis of the signal arrival, in nanoseconds). To solve engineering problems, it is required to find the position of the interfaces between different environments and then determine at what depth the boundaries are located, i.e. convert time section to depth

To transform the time section into a depth section, it is necessary to determine the speed of signal propagation in the soil media. The program includes three main methods for determining the velocity: by diffraction hyperbolas, by hyperbolic travel time curves of reflected waves and by means of amplitude analysis 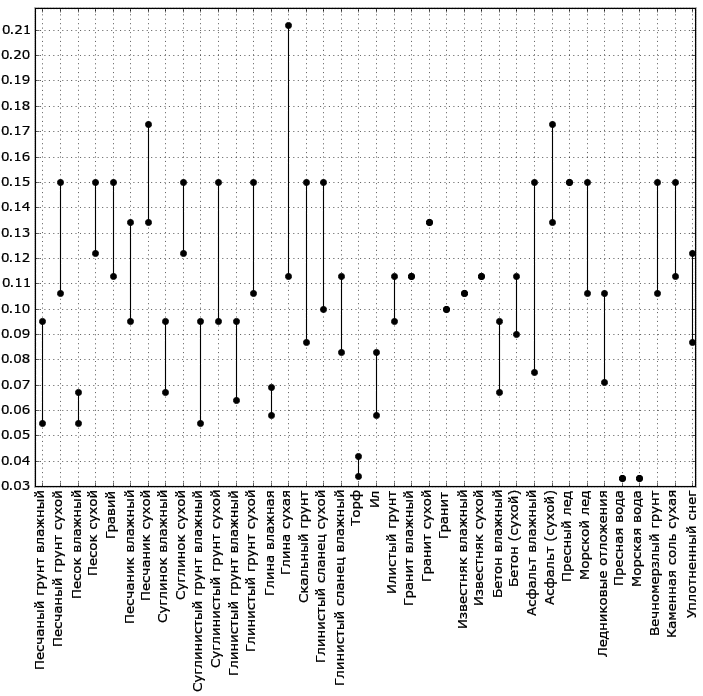 GPR sounding on a variable base
With GPR sounding, the distance between GPR antennas gradually increases. At the same time, either the position of the GPR axis with the simultaneous separation of both antennas in different directions (CMP - common midpoint survey), or the position of one of the antennas (WARR - wide-angle reflection and refraction method) can remain unchanged. The section at which the distance between the receiver and the transmitter is equal to zero is called the hodograph axis 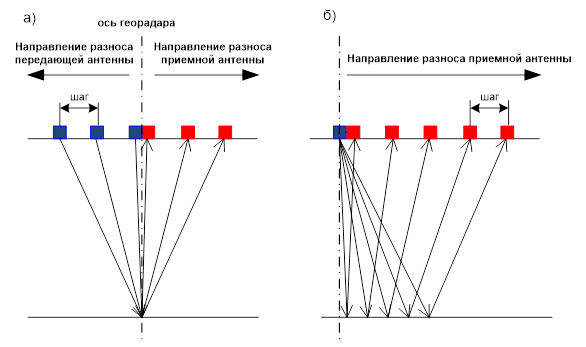 This test is carried out in order to build a soil model at a given point, i.e. determine the depth and speed of propagation of radio waves for each layer. On the radarogram, a set of hodographs of various electromagnetic waves can be distinguished: direct air, direct soil, reflected, refracted
To build a soil model, as a rule, only traveltime curves of reflected waves, which have a hyperbolic shape, are used. The program includes a unique method for analyzing the travel time curves of reflected waves, with the help of which the soil model is calculated

a - engineering-geological section; b - soil model built in the program; c - radarogram obtained after GPR sounding in the control section; hyperbolic travel time curves of waves reflected from the boundaries between layers are identified

Determination of propagation velocities of radio waves using amplitude analysis
The method consists in the fact that before the direct GPR survey at the site, a GPR test is carried out on a metal plate, from which the electromagnetic wave will be fully reflected

Testing on a metal plate

On the obtained radarogram, the reflection from the surface is distinguished, its amplitude Am is determined for different time readings: 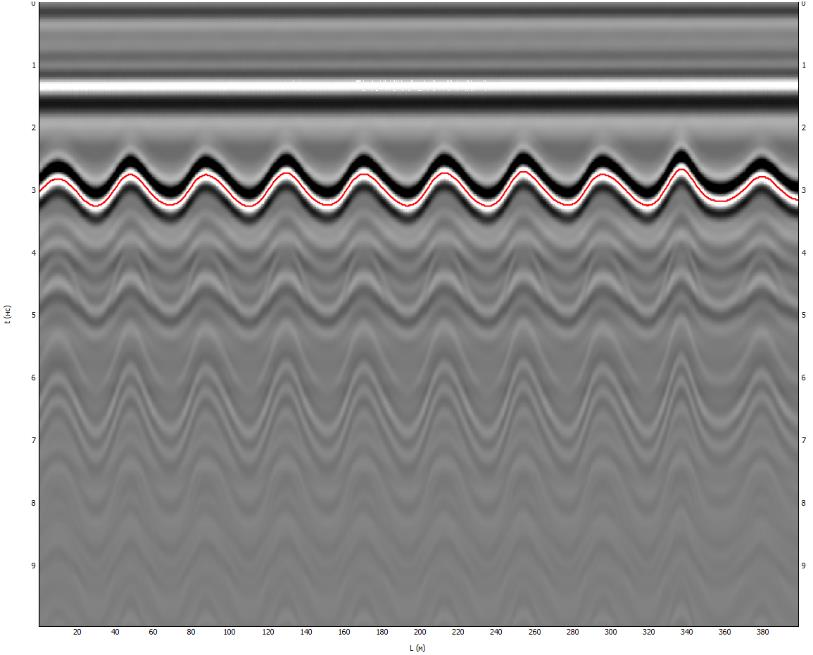 Radarogram obtained after testing on a metal plate

Knowing the amplitude Am, the relative permittivity in the first layer ε1 can be determined by the formula: 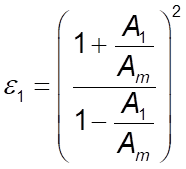 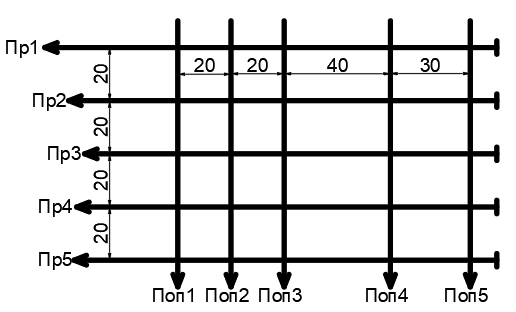 When processing such radarograms, it often makes sense to look at the data of all radarograms in a certain section (at a certain depth). For this, an amplitude map is built: 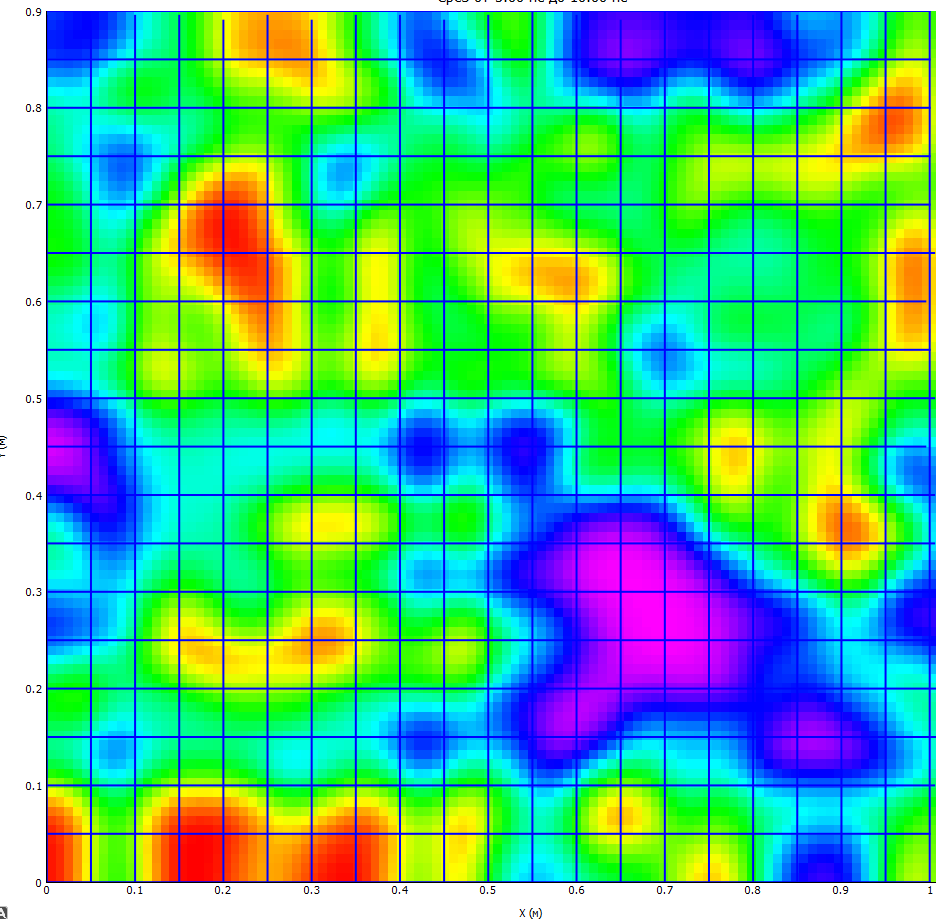 An example of an amplitude map